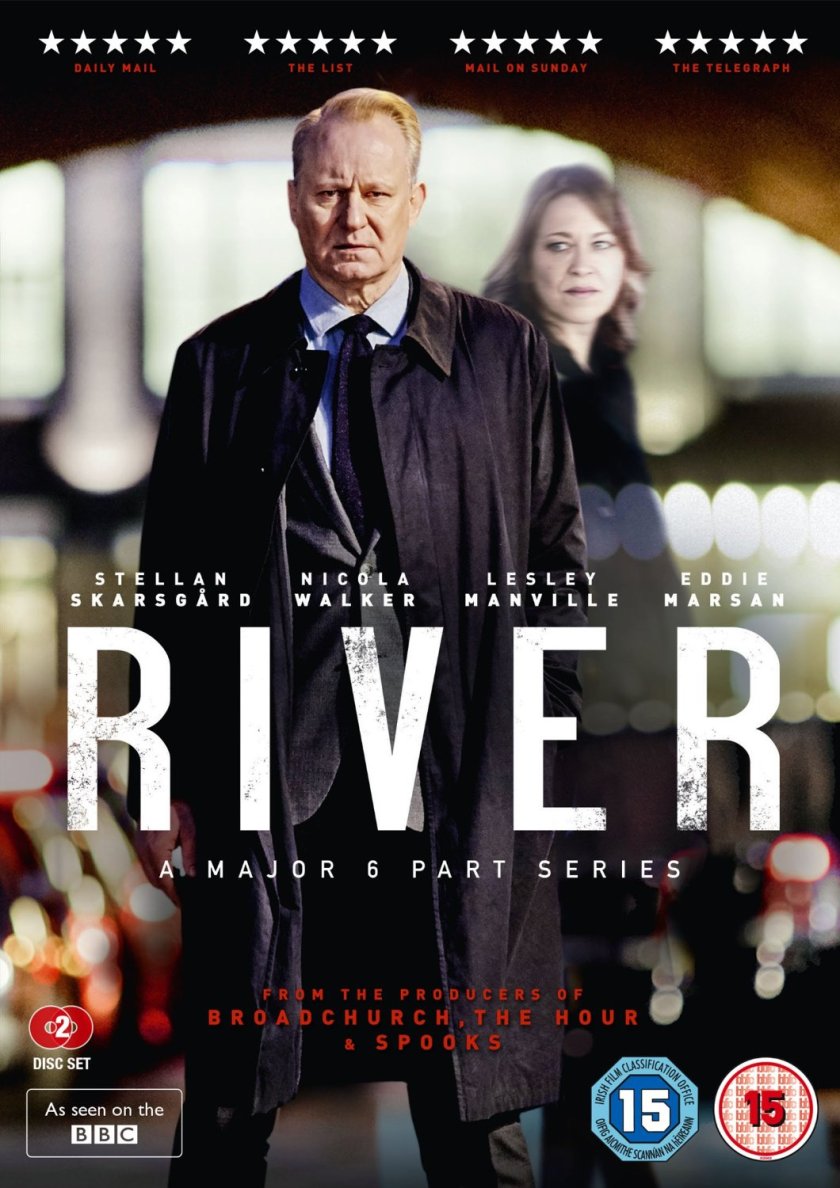 Nordic Noir comes to the East End of London in the form of Swedish film star Stellan Skarsgard. Temporarily leaving behind Hollywood soundstages for a UK TV series Skarsgard plays the eponymous River, a police detective who hears voices.

Multi-layered and emotionally potent, River is an audacious series from BAFTA Award-winning screenwriter Abi Morgan (The Iron Lady). Updating the detective drama Morgan has created a gritty and lyrical show that is one of the strongest dramas to debut in 2015.

A complex examination of the human psyche’s frailties, Morgan’s screenplay explores the motivations behind murder with a degree of empathy. Possibly influenced by Nordic Noir’, River focuses on criminality’s collateral damage with a strong emphasis on grief’s corrosive effects.

The latest in a long line of troubled TV police officers, River is suffering from survivor’s guilt following the death of his partner. Since childhood, he has heard what he believes to be voices from beyond the grave. Convinced his recently deceased partner (Nicola Walker) is communicating with him River’s grief endures.

River’s erratic behaviour is viewed with suspicion and concern by senior officers Police Superintendent Marcus McDonald (Owen Teale) and DCI Chrissie Read (Lesley Manville). Ordered to attend a series of therapy sessions with the police psychiatrist Rosa Fallows (Georgina Rich) he must prove to be fit enough to remain on active duty.

Skarsgard’s masterful performance conveys the pain of a man haunted by guilt. A BAFTA worthy portrayal of isolation, anguish, and suppressed rage.

More than an updated Randall and Hopkirk or a The Sixth Sense imitation, River is a sharply written six-part drama. Virtually faultless, the series makes a brave attempt to create a distinct identity and not be seen to swim in Broadchurch‘s slipstream.

A series rich with an abundance of excellent performances, supreme writing, and filmic cinematography. Undeniably one of the most significant British dramas to air this year.

River is available to order from Amazon.

One of Iceland’s most prolific directors, Baltasar Kormákur has helmed a number of films that have been commercially successful both at home and abroad. Best known internationally for Contraband, 2 Guns, and Everest his oeuvre also includes the highly regarded Icelandic films Jar City and The Deep. A career as an actor on stage and screen preceded his move behind the camera. Kormákur continues to act and has appeared in several of his own feature films.

Taking its name from the district where its characters live 101 Reykjavik presents a contemporary Icelandic Saga as a highly accentuated comedy of errors. Male repression and extended infantalism is contrasted with examples of female dynamism and determination as mother and son compete for the affections of a Spanish lover. Emotionally stunted Hlynur (Hilmir Snaer Gudnason) is in his early thirties living with his mother determined to live on welfare payments until he reaches pensionable age.

Insulated from the consequences of his actions by a laid back mother, he is unknowingly imprisoned by self-imposed lack of curiosity about the world beyond his district. Determinately disassociated from adult life, Hlynur spends his days gazing at internet pornography and evenings consuming a diet of soft drugs and alcohol.

Hilmir Snaer Gudnason delivers a performance pitched with an equal balance of pathos, cynicism, and vulnerability. Never straying into the realms of parody or sentimentality he conveys a complex myriad of emotions and traces an increasingly poignant journey as Hlynur’s certainties are eroded forcing the anti-hero to chose between a descent into inner turmoil or an embracing of personal responsibility.

Kormákur’s insightful and non-judgemental screenplay is brought to life by a succession of humane and honest performances. Explicitly acknowledging Almodovar’s influence Kormákur cast Victoria Abril (Tie Me Up! Tie Me Down!) as the Spanish flamenco instructor who sleeps with Hlynur and then reveals herself as his mother’s lesbian lover.

Released at a time when Iceland was becoming fashionable as a travel destination, Kormákur’s film’s cultural cachet was enhanced by a knowing score from Blur’s Damon Albarn and The Sugarcubes’ Einar Benediktsson.

Unsentimental and wry, 101 Reykjavik is a dark and eccentric character study. Hlynur’s internal monologue is complemented by crisp, clear and unadorned cinematography which captures the stark beauty of an Icelandic winter.

A strong debut from Baltasar Kormákur and an ideal stepping on point for an exploration into Icelandic cinema’s rich history.

101 Reykjavik is available to order from Amazon.

In the early 1990s Doctor Who was a battle weary Time Lord consigned to repeats on UK Gold. A combination of enemies more fiendish than the Master and Daleks had vanquished the errant science fiction hero; falling viewing figures and an indifferent BBC. Languishing in the time vortex of viewers’ memories the intergalactic vagabond would be revived for one night in a misguided TV movie starring Paul McGann and then placed back into the cryogenic freeze of development hell until Russell T Davies’ successful reinvention. 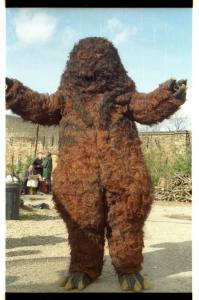 During those long dark days when enthusiasts clamoured for fresh adventures featuring their favourite foes a group of fans turned media professionals decided to take matters into their own hands and produce an independent and unofficial straight-to-video drama. Prohibited from including the Doctor or TARDIS the producers secured rights to include cherished characters and attempted to make Doctor Who without the lead character.

Produced on a budget smaller than the notoriously low funds available for late 1980s Doctor Who, Downtime was initially released on VHS at a time when fans were enjoying the more lavishly financed visual spectacles being offered by X-Files and Babylon 5.

A sequel to a pair of 1960s adventures, The Abominable Snowman, Web of Fear, Downtime sees Brigadier Lethbridge Stewart (Nicholas Courtney) and Sarah Jane Smith (Elisabeth Sladen) investigate a university which is offering personalised syllabuses without tuition. Run along the lines of a religious cult, New World University harnesses then cutting edge IT to enslave students and prepare a gateway for an evil force to enter this world.

The voice of her long dead father draws Victoria Waterfield (Deborah Watling) to a Tibetan monastery. Will the message from a man who died on an alien world bring salvation or unleash the ultimate foe?

A kitsch classic? The Who-niverse’s equivalent of Plan 9 from Outer Space? Dated visuals and uneven performances from the supporting cast mean Downtime is unlikely to find favour among fans of 21st century Doctor Who.

Downtime is available to order from Amazon

How a TV series is helping transform Malmö into a must visit destination: Sweden’s third largest city is the backdrop to a hit Scandi-crime series.

Showing no signs off running out of steam the third season of Danish-Swedish crime series The Bridge has been a critical and ratings success throughout Scandinavia.

One of Scandinavian TV’s biggest exports, The Bridge has been screened in 174 countries. Interest in the series is at an all time high cementing the third season’s status as one of 2015’s most anticipated returning dramas.

Since The Bridge first aired on BBC Four Malmö has had an allure for fans of Nordic Noir eager to follow in the footsteps of Saga Norén and Martin Rhode. In tandem with the launch of the third season a series of events and activities have been organised that that will satisfy even the most ardent Saga Norén fans.

Malmö Museer’s display of props, costumes, and set designs is a must visit destination for aficionados. Running until September 2016 the exhibition is entitled ‘A Non-Existent Malmö’. As the title reflects, The Bridge represents a Malmö that does not exist. The collection of exhibits invites visitors to consider what The Bridge’s success may say about contemporary Nordic society.

Alongside Saga Norén’s costume and mustard coloured Porsche, the centrepiece of the exhibition is a concrete bunker which represents cracks in the welfare state. Visitors that peer through the fractured edifice will see props and costumes from all three seasons including amulets and animal masks from the second series.

The exhibition also includes photographs, video clips, a map of Malmö locations featured in the series, and a large production bible which details the series creators’ key creative choices offering a revealing insight into the workings behind a hit TV series. Illuminating and engaging, the exhibition provides an exhaustive overview of The Bridge and its place in modern Scandinavian society.

Fans eager to take the experience of being in Malmö to an entirely different level should book a place on the location tour.

Travelling around the city’s hotspots, its backstreets and deserted industrial plants, a guide reveals behind the scenes stories, explains how Malmö has been transformed in recent years, and offers insights into Swedish culture.

An on board DVD player screens clips enabling fans to compare locations with their appearance on screen.

The tour lets fans follow in the footsteps of on-screen detectives Saga Norén and Martin Rohde. Viewers will be surprised to discover that a doctor’s surgery doubles as the city’s police station in the series. Taking in Malmö locations featured prominently in the series the tour visits the exterior of Saga Norén’s apartment block and offers fans spectacular views of the Öresund Bridge.

Backdrop to three seasons of murder, intrigue, and international police co-operation, the Öresund Bridge is a symbol of cross-border harmony. Opened in 2000, the ten mile crossing has a deep meaning for Denmark and Sweden. Until 1658 Skåne County was part of Denmark and in the years between 1521 and 1814 the two nations went to war 27 times. An architectural triumph, the bridge represents close cultural and economic ties between countries that once waged war but have now found a lasting peace.

Fans making a pilgrimage to Sweden’s southern capital to inspect scenes of crimes featured in the series will experience a metropolis more vibrant than its small screen counterpart. A cosmopolitan city undergoing expansion and renewal, previously an industrial district Malmö is now at the forefront of cutting-edge developments in design. An international centre for innovation and culture, Malmö ranked fourth in Forbes 2013 list of the world’s most innovative cities. This future-facing metropolis is home to a diverse populace, the city’s residents speak 176 languages.

For more information about Malmö:

Find information about The Bridge exhibition at Malmö Museer and tickets for The Bridge Tour here: